During more than 100 years cell biologists have been culturing cells on flat and hard substrates, called Petri dishes. Plastics replaced glass, but the plates Julius Richard Petri invented in 1887 haven’t changed and are still widely used today.  Although an instrumental tool for life-saving medical breakthroughs, like Sir Alexander Fleming’s discovery of penicillin, the in-vitro environment provided by Petri dishes widely differs from the native environments the cells are accustomed to in the body. As a result, they often lose their original functions and are no longer suitable to be used as models to test for instance drug candidates. The pharmaceutical industry increasingly recognized this fact and turns more and more to new in-vitro models, such as organs-on-chip, that more accurately represent the milieu in the human body. Organs-on-chip are advanced in-vitro models that mimic the smallest functional unit of an organ. These systems no longer only inform about cellular functions, such as viability, migration, differentiation, but provide the controlled but more life-like environment to investigate specific organ functions, such as vessel contraction, gas exchange, inflammatory response to name a few.

The objective of the Organs-on-Chip Technologies Laboratory is to develop organs-on-chip, focusing on the lung and its diseases, in collaboration with the Pulmonary Medicine and the Thoracic Surgery Clinics of the Inselspital, Bern University Hospital. To achieve this goal, the group combines engineering, particularly microfluidics and microfabrication, tissue engineering methods and material sciences. Recently, we reported about a breathing lung-on-chip, an advanced lung alveolar model that functions to emulate the ultra-thin air-blood barrier including the three-dimensional cyclic mechanical strain generated by the breathing motions. This system is currently further developed in collaboration with the start-up AlveoliX, with the aim to revolutionize the preclinical market. Another aspect of the lung alveolar environment that is being developed in the OOC lab, a functional lung microvasculature. Lung cells seeded in a micro-engineered environment, self-assemble to build a network of perfusable and contractile microvessels of only a few tens of micrometers in diameter.

Next to the pharmaceutical applications, organs-on-chip are seen as having the potential to be used in precision medicine to test the patient own cells in view to tailor the best therapy for each patient. Furthermore, such systems have the significant potential to reduce the use of animal models in medical and life-science research. More on the Organs-on-Chip Technologies Laboratory.

The FENRIV (Egon Naef foundation for in-vitro research) price 2018, worth 10'000CHF was awarded to Prof. Olivier Guenat from the ARTORG Organs-on-Chip Technologies Lab.

This award is aimed at supporting scientists, whose research allows to reduce animal experimentation. 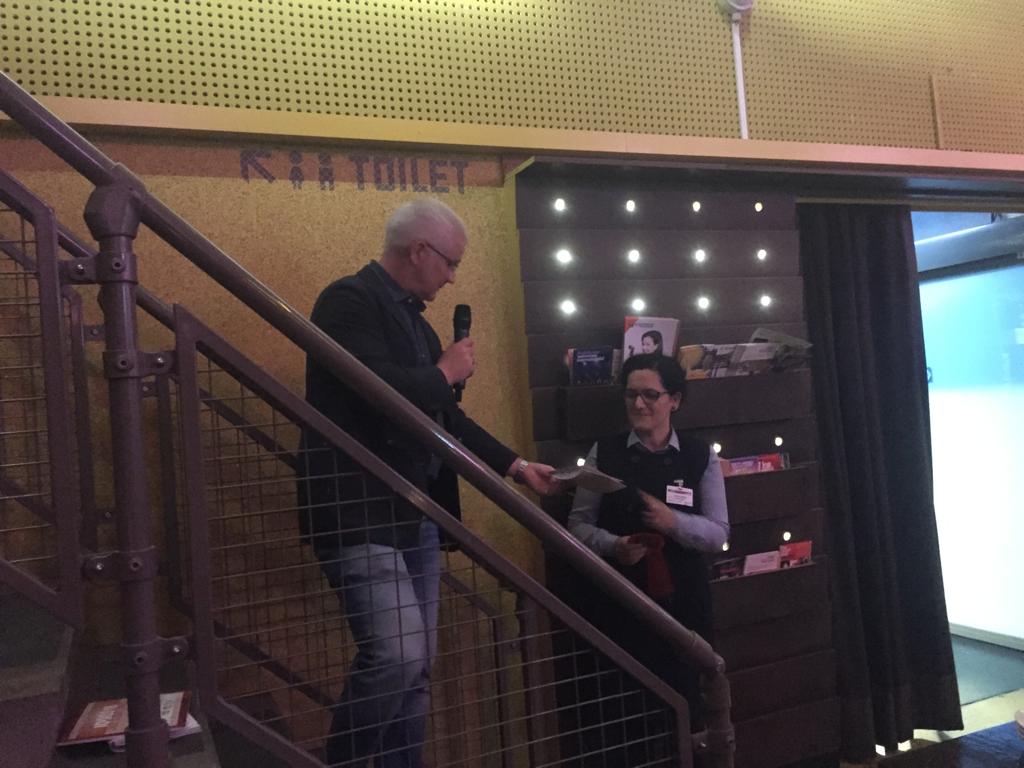 Congratulations to Soheila Zeinali, from the Organs-on-Chip technologies group, for the best poster award at the IOOCS 2018 conference in Eindhoven (the Netherlands). Her poster was entitled: "Role of Rhythmic Breathing Motions on In Vitro Pulmonary Vascular Remodeling”. 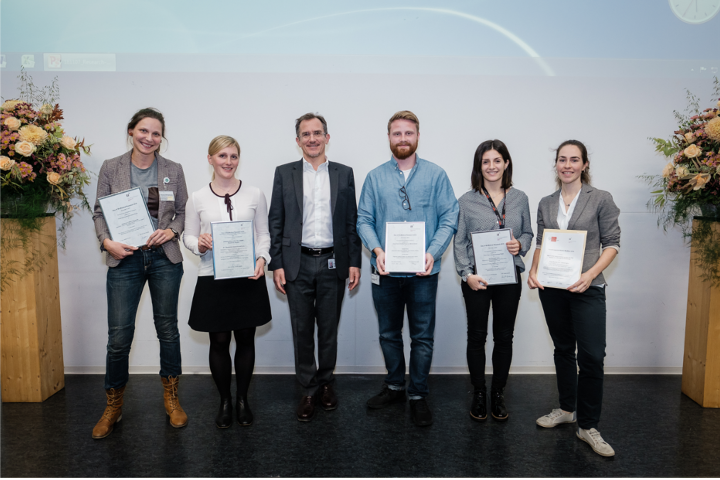 Congratulations to Pauline Zamprogno, from the Organs-on-Chip Technologies group, for the best poster award "Research Prize Alumni MedBern” for her poster entitled: "New human lung alveolar barrier on chip based on a biological membrane". This work is a collaboration with the Thoracic Surgery Clinic of the University Hospital of Bern. Congratulations also to Elisa Rodrigues Sousa, from the Urology Clinic for the best preclinical poster award, entitled "Microvasculature on chip models to assess the aggressiveness of prostate cancer cells”.

The Lung-on-a Chip developed at the ARTORG Organs-on-Chip Technologies team has just been published in Nature Scientific Reports. This advanced in-vitro system mimics the lung alveolar barrier in an unprecedented way, using a 3 micrometer thin, flexible and porous membrane that is cyclically deflected by a micro diaphragm, like in the lung. The work is a collaboration with the start-up AlveoliX, the Pulmonary Medicine Clinic and the Thoracic Clinic of the University of Bern, the University of Ulm (Germany), The Helmholtz Center for Infection Research (Germany), and the Völklingen Heart Center (Germany). 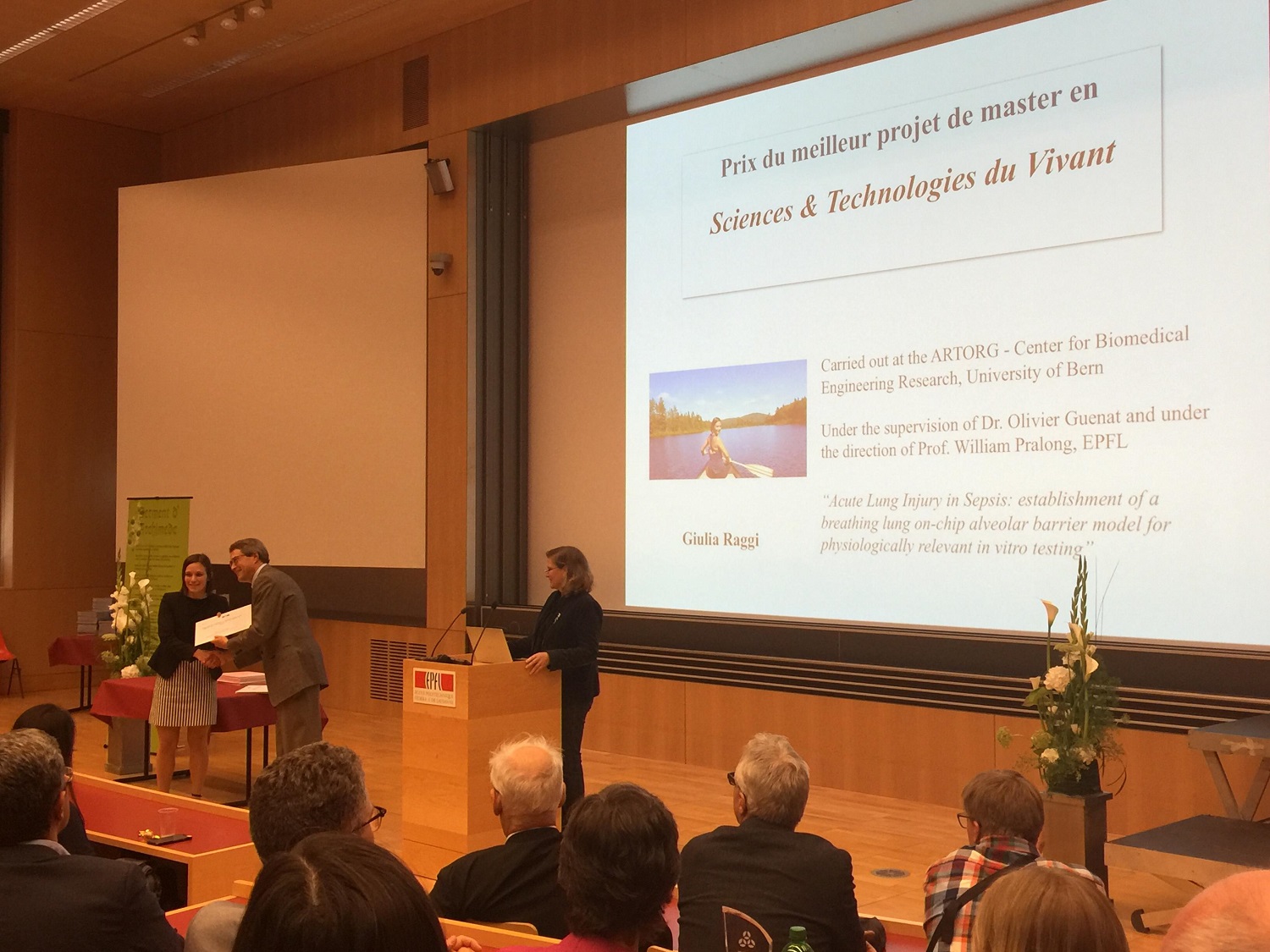 Congratulations to Giulia Raggi for the prize for the best MSc project from the Life Sciences & Technology Master at EPFL. Giulia reproduced an acute lung injury based on the lung-on-chip technology developed at the ARTORG Organs-on-Chip Technologies laboratory.

The Fraunhofer Institute for Interfacial Engineering and Biotechnology IGB is coordinating the establishment of a European research network to promote organ-on-a-chip technology. Read more here....